The six detectors and their associated cosmic ray counts can now be listened to in realtime as modal music. The range of data values within a 16 second span are scaled to the max value over that time so that the max value plays the lowest note out of a 4 octave scale starting from Midi note 36 or two octaves below middle C. Detectors are played in the following order 2,1,4,3,6,5. As the counts in detectors 2, 4 and 6 are generally higher than in 1, 3 and 5, the technique of playing the thick detector before each thin detector helps to make the music more intelligible as the downbeat notes generally will be lower in pitch.

Higher counts are mapped to lower pitches. When a detector received more counts, it sounds lower to signify more counts or a greater weight hitting it. When it receives fewer counts, it is higher pitched, receiving less energy or fewer particles hitting it.

As counts increase the harmony of a sustaining string section pitch conveys where the detectors max value within 16 seconds falls in relation to a maximum count value of 30000 counts per second. This pitch, again, will move lower as counts increase. 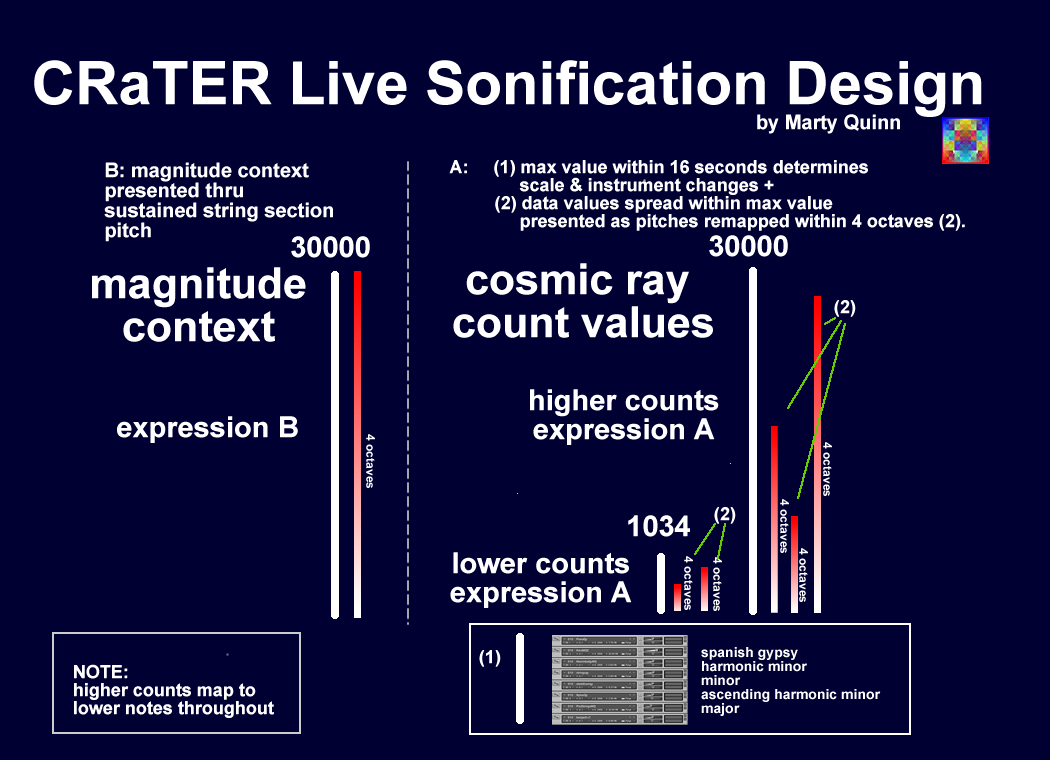 Two ranges of count values are used to control the selection of instruments and scales used to play the detector count values. The lower and smaller event range with a maximum scaling value of 1034 is employed when the current max value for the detector counts are less than 1034 counts. The higher and larger event range is used when the current max value is above 1034 counts. The lower range uses a maximum scale range of 1034 counts, and the higher range uses a maximum scale range of 30,000 counts. These maximum values allows the max detector counts within each 16 seconds to linearly map to a selection of an instrument and a musical scale in the following manner:

The musical scales are selected from lowest counts to highest counts within each range using the following list. The steps between notes in each scale are listed inside square brackets where 1 is a half-step, 2 is a whole or two steps and 3 is 3 steps based on 12 half-steps making up an octave like on a traditional keyboard.

Within each range, when few cosmic rays are hitting the detectors the music will be in a major scale. As counts increase, the music becomes more and more minor. The following graphic illustrates the instrument and scale selection that will occur as cosmic ray counts increase. 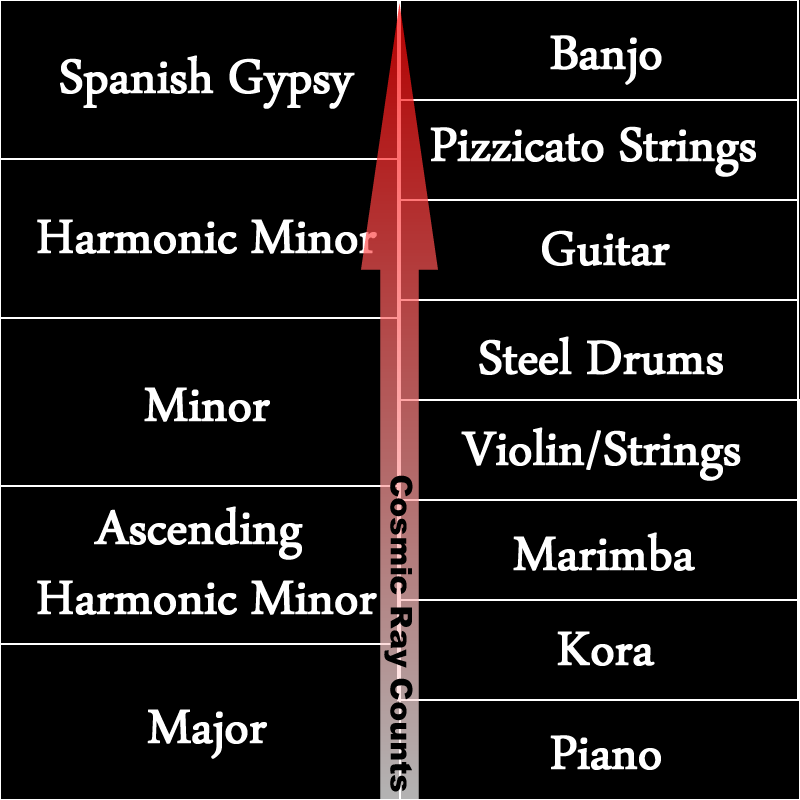 The string sound sometimes stops and then is restarted after a brief pause, This adds a bit of interest and variety.

Some percussion provides the following information: Each percussion hit signifies the start or downbeat of the detector presentation for that second. The low djembe drum sound signifies the beginning of a new max scale value based on the largest value amongst the 6 detectors in that second. This happens every 16 seconds, and if a next set of detector numbers contains a value that is larger than the current largest number, then that number becomes the new max value and the low drum is sounded again. The 16 second counter is reset to 0 whenever the max scale value is changed. Then downbeats alternate between a triangle and a bongo drum hit till the next max value event occurs (at most after 16 second intervals). The timing between detectors is approximately 166ms. Having the timings varied made it too difficult to hear the data without the brain wanting the music to be placed in this or that downbeat, regardless of the actual data pulse every second.

When the spacecraft is on the farside, the data goes 'stale' and the sonification design repeats the last half orbit of live data, changing the bongo sound to a higher hit and the triangle to a muted triangle so one can hear when the data is in repeat or stale mode.

The audio key generates cosmic ray counts moving from 71 to 1034 in 29 steps, where each step is 1 second of data. Then it moves from 1034 to 30000 counts in 29 steps and seconds. Then it reverses the counts. With each step the max value is changed for that set of data values and is shown in the upper corner of the graphic, and so you hear the sound of the djembe drum each second. Normally, this occurs once every 16 seconds or less, but usually not every second. The scale used at any particular level of counts is shown on the top left, and below it, the number represents the randomly generated max value within that second. The max value on the left should be close to the max value per step shown on the top right. To better hear the audio key values and changes, we recommend pausing the radio station before playing this video. The data per second also simulates the usually higher counts in detectors 1 and 2.

For an audio introduction to the sonification design, hosted by Marty Quinn, click here.

Listen to the station on your mobile or desktop device as follows.

On an IPhone:
Point the safari browser to fire.wavestreamer.com:9411/listen.pls.

On an android:
Download the Shoutcast app for the Android. Search for Crater Live.

CRaTER Live in the News

Featured on Euronews TV Space Program on January 30, 2014. Click on the video below and more info may be viewed at http://euronews.com/2014/01/30/rosetta-the-comet-hunter-awakes/.